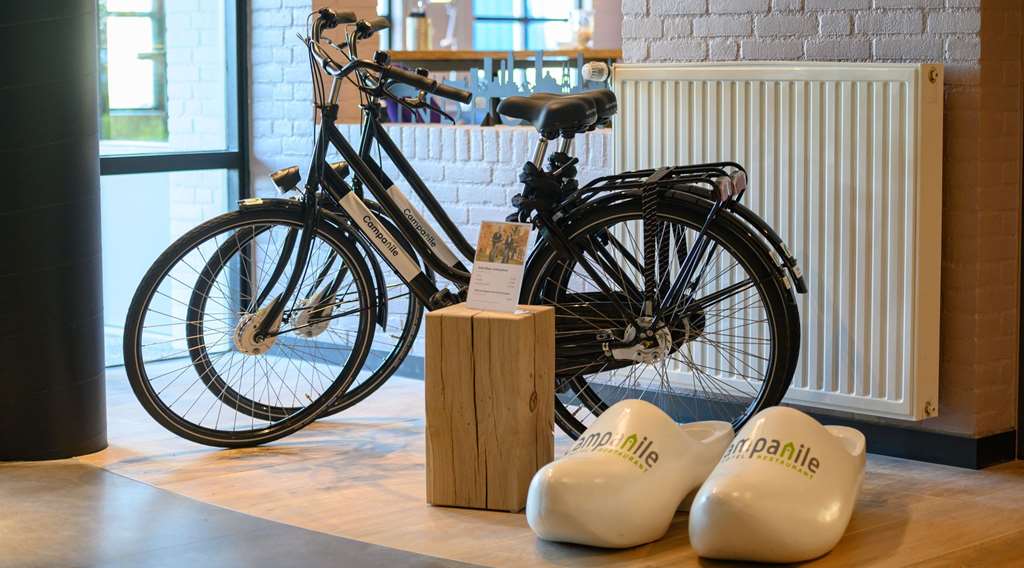 Do you like Campanile hotels ?
Tell all your friends about it !

Hotel Campanile Eindhoven is located on the outskirts of Eindhoven, the most intelligent region of the Netherlands.

Campanile Eindhoven, situated on the ring road about 10 minutes from Eindhoven Airport, can easily be reached using the bus which stops near the hotel. The same bus will also take you to the centre of Eindhoven in about 20 minutes. On the way to the centre, you will pass the striking Evoluon building. It would be hard to imagine Eindhoven without the PSV stadium, which hosts various events such as concerts by Dutch singer Guus Meeuwis, as well as football matches. The history of Philips and DAF are also closely connected with Eindhoven. In addition, Eindhoven is perfect for sports lovers, as the Pieter van de Hoogenband swimming stadium and various fitness centres are located just a short distance from the hotel. For golf lovers, there are various golf courses in the local area, such as Welschap and the Tongelreep.

Hotel Campanile Eindhoven, where the emphasis lies on conviviality and hospitality, is situated on Eindhoven's ring road. The hotel has 84 rooms, a restaurant, bar and lounge and an attractive terrace where you can relax in good weather. The hotel also has a conference room suitable for small groups. There are plenty of parking spaces too, so parking your car isn’t a problem. You will be pleasantly surprised by this hotel, which provides hospitality and local Brabant specialities for your enjoyment.

The hotel has 84 rooms including double rooms with a double bed and twin rooms with single beds, for both single and double occupancy. The hotel also has several rooms for disabled guests, with specially adapted bathrooms. The rooms are over 4 floors and can be reached by lift.

All the rooms have a flat-screen TV, coffee and tea-making facilities, free Wi-Fi, desk, telephone with wake-up service and a private bathroom with bath/shower and toilet.

The hotel has rooms for disabled guests. These rooms are on the ground floor, with easy access. They also have specially-adapted bathrooms.

Full breakfast buffet
Between 6.30 am and 9.30 am (between 7.00 am and 10.00 am at weekends), you can enjoy a balanced breakfast which includes tea, coffee, fresh fruit juice, cereals, pastries, cheese, meat and yoghurt, and of course our fruit salad. However, we also offer a hot breakfast with eggs cooked just the way you like them.


A hearty menu, all year round!
The restaurant has a total capacity of around 110 people. The cooking style is à la carte, but if required we can also prepare a buffet for groups. In the summer, you can enjoy a delicious breakfast, lunch or dinner outside on our terrace.

For your business trips or family holidays, your hotel in Eindhoven offers you a…

For your business trips or family holidays, your hotel in Eindhoven offers you all the services to facilitate your stay:

- Facilities for guests with reduced mobility
- Free WIFI in all rooms
- Parking
- Complimentary tray with kettle, tea, coffee and selection of cakes
- Hairdryer and iron available at the reception

Plan your route to the hotel CAMPANILE EINDHOVEN